Dameon Stackhouse was several years into his prison sentence when he learned he would have a shot at earning his college degree. He was 37 years old and sitting inside East Jersey State Prison.

“You hear things, and over time, you’re just disappointed so many times,” Stackhouse told CBS News. “But I’m optimistic, so whenever something is presented to me, I jump clean on it whether it’s real or not.”

Despite his initial skepticism, the opportunity turned out to be very real. It was 2013, the first year of an initiative known as New Jersey Scholarship and Transformative Education in Prison, or NJ-STEP.

Stackhouse, now 43, says access to education transformed the way the prison operated. The college degrees earned inside look identical to the ones a student would earn on a traditional campus, renewing a sense of purpose for those enrolled in the program.

“It brought all the communities closer together,” Stackhouse added. “You’re talking about individual gangs. Bloods, Crips and Latin Kings working together without any issues.”

Stackhouse said the program helped ease tensions throughout the prison because no one wanted to “damage another individual’s opportunity.”

“When you educate individuals on how to be better and productive citizens, you don’t have to keep reinvesting in that,” Stackhouse said when asked about criticism of tax dollars paying for an inmate’s education.

“That investment turns over,” he added. “You work with the community. It stops our kids from going to the youth correctional facilities.”

Stackhouse currently participates in a diversion initiative to help juveniles stay out of the criminal justice system he spent over a decade in himself. He said the ultimate goal is to open up a youth center of his own.

Stackhouse not only serves as a role model for those waiting to be released but for the kids he volunteers with. It’s a position he doesn’t take lightly. He says he’s always working toward the goal of his own youth center one day in Trenton.

“I’ve always been a therapist, I’ve just never had the education before,” he said. “Even when I was incarcerated, everybody came to me with issues. I have my own issues, but I can listen. Sometimes people just need to talk it out. I’ve been doing that my whole life.” 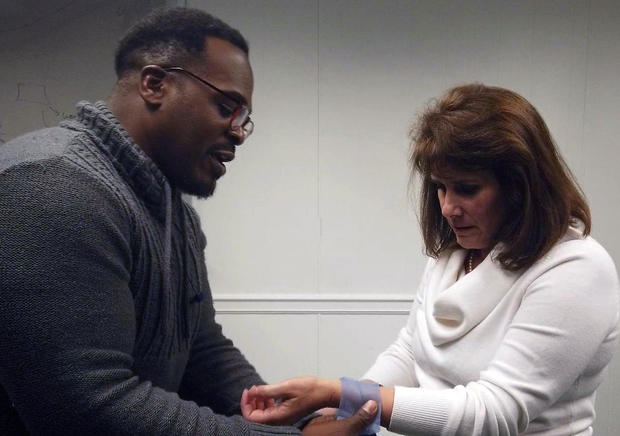 Tyler is an associate producer for CBSN. She also covers criminal justice reform. Reach her at: tyler@cbsnews.com.