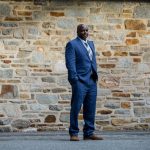 A federal program with bipartisan support in Congress has helped Maurice Smith, who served 27 years in prison, earn a four-year degree while he was incarcerated. Now that he’s been released, he told us he wanted to “rewrite my life story.”

BALTIMORE — Maurice Smith stood anxious and alone, as the crowd of graduates around him hugged and chatted a few feet away. He was cloaked in the same black gown and donned the same black cap, but that was about all that he and the rest of Goucher College’s Class of 2019 had in common.

When they were 19, they were starting college. When he was 19, he was starting a prison sentence for murder that would last 27 years, one month and seven days — longer than his fellow graduates had been alive.

“There are many roads to this moment,” said Mr. Smith, 47, as he held up the cellphone he had recently learned to use and snapped a picture of himself against a backdrop of squares and tassels. “They took theirs. I took mine. But we’re all here.”

Mr. Smith’s journey from incarceration to college graduate has been cheered on by a bipartisan and ideologically diverse coalition that has pressed the case for criminal justice. The path he took was quietly extended in the last year to thousands of other prisoners across the country. Mr. Smith was able to complete his bachelor’s degree through the Goucher Prison Education Partnership while serving at the Maryland Correctional Institution in Jessup, using federal Pell grants offered through a pilot program called Second Chance Pell.