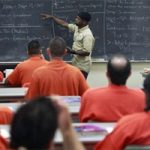 Allowing prisoners to receive federal aid to pay for college courses while incarcerated would reduce recidivism rates, save states money and boost the economy as former inmates get higher-paying jobs, a new report shows.

Entitled Investing in Futures, the report from the Vera Institute of Justice estimates that nearly 463,000 inmates in state prisons — including 7,239, or more than a third of the prison population, in New Jersey — would benefit if the federal government rescinds a 1994 law that prevents people from receiving Pell Grants while incarcerated. Pell Grants are the main federal college aid that does not need to be repaid for low-income students. Even if only half of those eligible in New Jersey were to take college classes, that would lead to a 5 percent increase in the number of former prisoners employed each year and a $650,000 rise in wages earned the year after their release, according to the report.

“This would benefit not just the incarcerated people themselves, but also the communities they will be returning to,” said Nick Turner, president of the Vera Institute, a New York-based organization advocating for criminal justice reforms.

The institute’s push to make it easier for those in prison to get an education dovetails with an effort by New Jersey lawmakers to extend eligibility for state financial aid to inmates here. The Senate last year passed S-2055, which would eliminate a provision in current state law that prohibits prisoners from receiving either state grants or scholarships, most notably Tuition Assistance Grants for those of low income. The bill awaits action by the Assembly Higher Education Committee.

Advocates: Now is the right time for reform

NJ-STEP, which enrolled about 550 students last July, is funded largely by nonprofit foundations. Some students currently get federal aid in the form of Second Chance Pell Grants, a pilot program the Obama administration began in 2016 offering grants for about 12,000 inmates nationwide.

Unlocking the ‘transformative’ power of education

Arthur Rizer, Justice and Civil Liberties Policy Director at the R Street Institute, said when inmates are taking classes, they are busy and less apt to cause trouble for fellow prisoners and guards. But they also feel better about themselves.

“An education is transformative, which is why we send our kids to college,” said Rizer, a former police officer and prosecutor who now works at the conservative think tank. “For the person who is incarcerated, it is even more transformative. They have no hope. But in the classroom, they see themselves as a person, rather than just another number being watched by the guards.”

Jose Bou, who earned a bachelor’s degree from Boston University while serving a 12-year prison sentence for drug trafficking, attested to that.

“Something happened as I started to get educated,” said Bou, who is now equity, family and community partnerships manager at the Holyoke Public Schools in Massachusetts. “I wanted to be part of something bigger.”