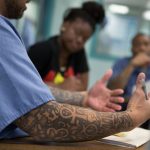 Close the Curtain on This 1994 Legislative Penal Drama

A lot has changed in the 25 years since the Violent Crime Control and Law Enforcement Act was passed. For many elected officials, it is now politically advantageous to be seen as a criminal justice reformer rather than a supporter of mass incarceration. Even President Donald Trump claims to be a reformer—regardless of whether his policies and attorneys general nominations actually reflect this. Yet one thing remains constant: Education, especially higher education, continues to be the most effective intervention for those in prison. All people who are incarcerated in state and federal prisons—regardless of why or for how long they are in prison—should once again be able to access Pell Grants, so that they can better the lives of themselves and their families.

There may be no place in America where opportunity and transformation are more important than in state and federal prisons. Education has the unique ability to offer a person both. That is why Congress should take advantage of this rare opportunity to pass a bipartisan bill—as a standalone bill or as part of Higher Education Act reauthorization—that would immediately have a positive impact on people’s lives and on society at large. It is long past due for the curtain to close on this legislative penal drama.