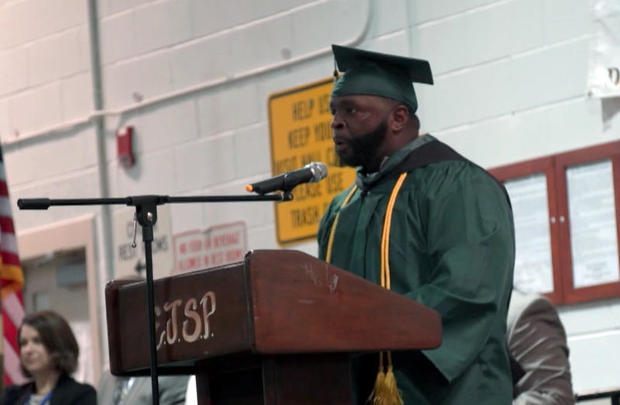 Lavonta Bass’ khaki-colored prison uniform peeks out from beneath his cap and gown. Honor cords are draped around the 42-year-old’s neck. He has spent over a decade in prison but says he was fine delaying an early release if it meant his son could see him graduate as valedictorian.

“I think it was a symbolic moment for him,” Bass told CBS News. “For me to really show him that although I’m here, I’m still trying to do things to better myself.”

CBS News gained exclusive access to East Jersey State Prison for a graduation ceremony in November. Bass was one of 56 incarcerated students who earned a degree — an associate’s from Raritan Valley Community College or a bachelor’s from Rutgers University.

Both degrees carry the same credentials as if they were earned on the respective campuses, said the program’s coordinator.

“If we had a degree inside that didn’t stand the test of time when the person leaves, what would we really be offering them in terms of a credential?” said Sheila Meiman, a director at Raritan Valley. “They need the skills, they need the knowledge, they need the ability to transfer that degree.”

The program is part of an initiative called New Jersey Scholarship and Transformative Education in Prison, or NJ-STEP — a partnership between Raritan Valley, Rutgers and the New Jersey Department of Corrections.

Bass has been behind bars since 2006 for an aggravated assault conviction. As he prepares for release, he said his focus is on using his education to provide for his family.

“I’ve been gone for quite some time,” Bass said. “Everything I do now, it’s not about me, it’s about them. This is just one step of many that needs to be taken so we can continue to move forward.”

Seven out of 13 correctional facilities in the state participate in NJ-STEP. Since 2012, more than 200 students have earned associates degrees and more than 40 students have graduated with their bachelor’s in Justice Studies.

One of the biggest hurdles for such programs is the cost. That’s in large part due to the 1994 crime bill, which barred incarcerated individuals from obtaining federal student aid through Pell Grants.

That spirit resonates with Marvin Spears, the valedictorian of the bachelor’s program. In his graduation speech, the 54-year-old said he views his classmates earning degrees as an ideological shift. Looking out at a crowd of family and friends, he spoke about “redefining the identity of the incarcerated man.”

That’s an identity Spears has carried for decades. He was sent to prison in 1994 for first-degree murder.

“We’ve always been painted with the picture that we are our crimes,” Spears told CBS News. “Going through the program and having people believe in us, showed us that if we did the right thing with the program then it would transcend these walls.”

Studies show that education helps reduce the likelihood someone will land back behind bars. Once released, 90% of formerly incarcerated students who earn a Rutgers degree are employed or participating in a full-time graduate study program within a year.

Tyler is an associate producer for CBSN. She also covers criminal justice reform. Reach her at: tyler@cbsnews.com.